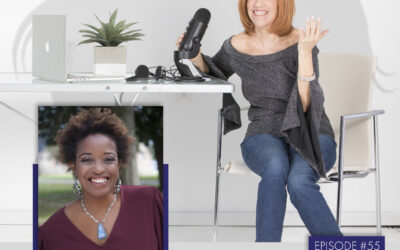 Leslie Gray Streeter is Black and Baptist, her late husband Scott was White and Jewish. They had met back in 9th grade when they were both in the same high school. They reconnected some 20 years later through Facebook. It didn’t take them long for them to fall in love and marry.

They had only been married for five years when in 2015 Scott died suddenly of a heart attack. Leslie had been laying right next to him. They had also been in the final stages of adopting their son, Brooks.

A veteran journalist and writer, her story needed to be told. And so ‘The Black Widow: A Sad-Funny Journey Through Grief for People Who Normally Avoid Books With Words Like “Journey” in the Title’ was written, a heartwarming, love story that has all the real-life elements of love, heartbreak, and laughter.

It’s the story of the religious and racial obstacles that they overcame and how Leslie navigated grief after losing Scott so suddenly. And of course, busting stereotypes on how she was supposed to act.

Tender, true, and endearingly hilarious, Black Widow is a story about the power of love, and how the only guide book for recovery is the one you write yourself.

Leslie is an author, speaker and journalist who has written for O, The Oprah Magazine The Palm Beach Post, Modern Loss, The Sweet Midlife with Lynne and Leslie, and New Musical Express. She has been featured on Huffington Post, FoxNews.com, in the Miami Herald, The New York Times as well as other sites. Leslie is a playwright a well having written ‘The Gift of the Mad Guy’.

‘Black Widow’, her memoir was released in March of 2020, right before the pandemic hit and has been named a top pick by Glamour, The New York Post and others.

Having just moved back to her hometown of Baltimore along with her son, Brooks, Leslie is currently Senior Director at Laurel Strategies, a D.C. based CEO and C-Suite advisory firm.

Candid and heartwarming
This week I talk with Leslie Gray Streeter, candid and heartwarming…
Navigating and embracing differences
Busting stereotypes
Overcoming racial and religious obstacles
‘New Widow Lifestyle’
Integrating tradition with her own need and belief
Finalizing the adoption of their son
The journey of writing her story
James Patterson – a big fan