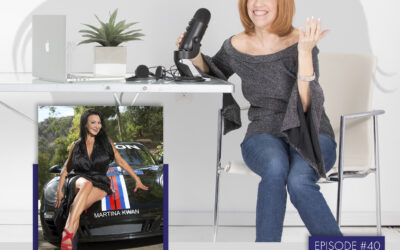 Daring to be different

For Martina Kwan, born in Hong Kong to a German mother and Chinese father, being different started right there. Martina was 8 years old when the sounds of war were surrounding her and her family in war torn Beirut, Lebanon. The next 2 years of her young life would be the defining years that have led Martina to living fearlessly.

Is it ever too late to try something new? Think again. At the age of 50 Martina took her hobby of race car driving up a notch, and became the world’s only Female Chinese/European race car driver. Did I mention that she is a three time champion? That’s 3-time champion in a male-dominated racing category in her Porsche 911.

By now you must know that this is not all that Martina has accomplished. She worked for some of the biggest finance and accounting firms, PricewaterhouseCoopers, KPMG. And she was Senior Management for the Ian Schrager properties. Not finished yet…Martina became an entrepreneur, winning Telly and Emmy awards for the first company she founded, So! Animation. A candid conversation about daring to be different. Daring to be different and how an Arabian horse changed a hobby into a champion.