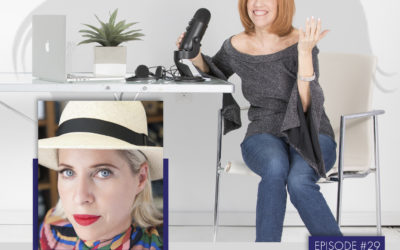 In this crazy world we seem to be connected 24/7/365. So what would happen if we took some time off? Maybe start with an hour or jump right to a day.

Sounds scary? Tiffany Shlain, Emmy-nominated filmmaker and author of ’24/6: The Power of Unplugging One Day a Week’ does just that. For the last 10 years, Tiffany and her family have unplugged one day a week, from Friday night to Saturday night. It’s been a way for her family to make an oasis for themselves and focus on what matters.

Tiffany explains how this came about and why it is so important, especially in these times of unease and unknown. We talk about unplugging, her documentaries, Challah baking via Zoom and so much more.

Tiffany is the founder of the Webby Awards, and Co-Founder & Executive Director of Let It Ripple Film Studio. She has won over 80 awards and distinctions for her films and work, including selection for the Albert Einstein Foundation’s initiative Genius: 100 Visions For the Future. And she’s been named by Newsweek as ‘one of the women shaping the 21st century.’

Four of her films have premiered at Sundance, including her acclaimed feature documentary ‘Connected: An Autobiography about Love, Death & Technology.’ Her film ’50/50: Rethinking the Past, Present and Future of Women + Power’ premiered live at TEDWomen. Her films and art installations have shown at museums including MoMA NYC and the Leonardo da Vinci Museum.

Tiffany lives in Northern California with her husband and collaborator Ken Goldberg and their two daughters Odessa and Blooma.