“The portrait is one of the most curious art forms. It demands special qualities in the artist, and an almost total kinship with the model.”
-Henri Matisse

100 years later and 100 women. 2020 marks the 100th anniversary of the passage of the 19th Amendment. The 19th amendment guarantees and protects a woman’s constitutional right to vote. Because of the 100th anniversary, Vital Voices declared 2020 to be a special anniversary year for women globally. Vital Voices, an international nonprofit organization that champions female leaders, recognizes these women for their social, economic, cultural and political achievements.

As late 2018 approached, Gayle Kabaker was approached by Vital Voices.  Gayle was asked to paint these 100 portraits. 100 women who are using their power to empower.  And 100 portraits to be completed within the year to be exhibited at the Kennedy Center in the Hall of Nations..(Below is an image taken from Gayle’s website regarding the show.) 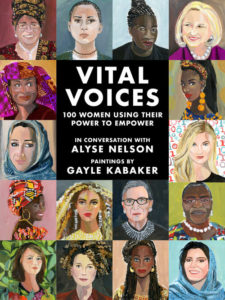 Gayle did not hesitate. Among the women: 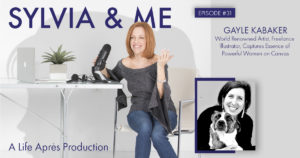 What a great way to kick off our fourth season! Listen to my conversation with Gayle on this week’s podcast. We talk about her technique. And of course how she was able to stay focused and what this project means to her.

Gayle is a freelance illustrator covering everything from fashion and general illustration, to animation, logo and brand development. Her work has graced the cover of New Yorker magazine five times. And Gayle’s first New Yorker magazine cover was, ‘June Brides’ celebrating gay marriage in 2012. Her work tends to be very feminine and Gayle loves exploring beauty in all forms. In addition to painting, Gayle has written, directed and produced two award winning 5 minute movies – The Great Ashfield Pancaper and Pandcaper 2 – Mr. Jones Strikes Back. Gayle graduated from the Academy of Art in San Francisco. She moved to Western Massachusetts over 30 years ago with her husband artist Peter Kitchell.

Summer is right around the corner. As things around us are start to open be smart, be safe and be mindful of those around you. And listen to some extraordinary, inspiring women.By the way, if you know of an extraordinary woman, contact me at sylvia@lifeapres.com.

You can find us on your favorite podcast platform. And of course, on our website,