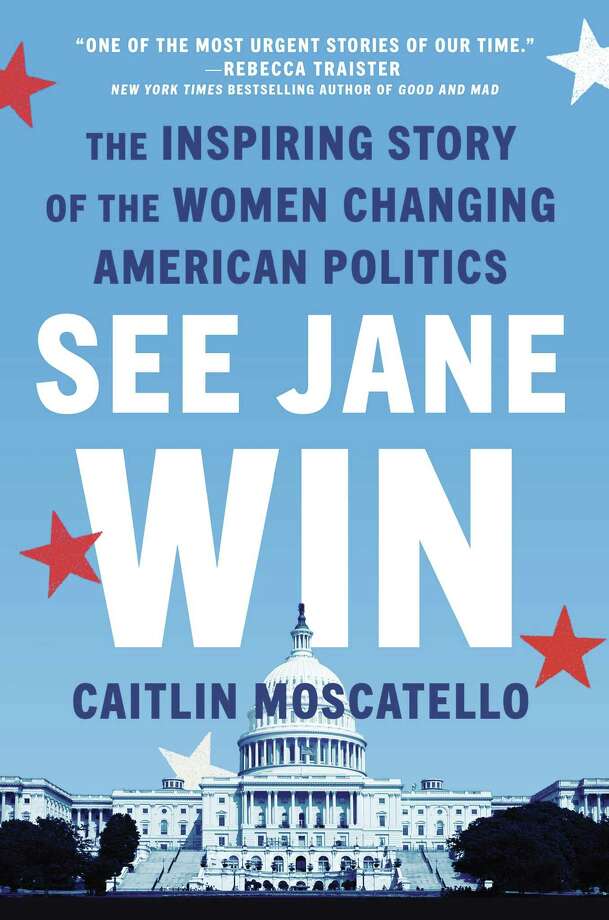 “See Jane Win” is a bracing antidote to that dreadful November election night in 2016 when women of the world watched as their champion, so close to shattering the highest glass ceiling, lost to a self-avowed assaulter.

As the returns confirmed Hillary Clinton’s loss, I steeled myself with the hope that Arthur Schlesinger’s words would prove prescient: The pendulum swings. And, as author Caitlin Moscatello reveals, it has so proved.

Women ran and women won – transforming American politics. In the 2016 election cycle, 900 women contacted Emily’s List (an organization created in 1985 to support female candidates for elected office); in 2018, 40,000 did.

The energy of the largest protest, the Women’s March that took place globally the day after the inauguration, translated into the largest-ever number of women running and winning.

Previously, recruiting women in their 40s was tough. Far more often, younger women or women over 65 volunteered, but in 2018 women across all ages, colors, creeds and sexual orientations stepped up. Wanted in. Wanted to run.

Much of the attention was on the 100-plus women who won congressional seats, but the “bulk of the ‘wave’ was the more than 3,500 female candidates running for state legislative seats – a 28% increase” from two years before.

The author is not a cool, nonpartisan, objective reporter. She has a mission. Moscatello is an advocate upset by President Trump’s ascendancy.

The result is a book alive with insight and excitement about women who have overcome obstacles: Anna Eskamani, the first Iranian American in the Florida legislature; London Lamar, an African American woman who became the youngest legislator in the Tennessee House; Abigail Spanberger, who won the congressional seat once held by Eric Cantor, then by David Brat, a Trump-like anti-immigrant candidate; and Catalina Cruz, a “dreamer” who won a seat in the New York legislature.

Moscatello captures highlights from the campaign trail and the fierce urgency of new candidates, and illuminates in vivid detail the moments that show the essence of these women’s guiding values.

Cruz, the New York candidate and a former undocumented immigrant, meets Moscatello for an interview in a noisy coffee shop. The author describes how Cruz “casually wiped the crumbs from her brown butter donut off the counter onto her saucer, stuck the napkin in the cup, and stacked it all in a tidy pile for the café staff. It was a subtle move, the reflex of someone who knows what it is to work a job cleaning up other people’s messes.”

Spanberger, a former CIA undercover operative, ended a debate in which she was repeatedly berated as a Nancy Pelosi clone and as “soft on crime” by detailing her work with the FBI and with local and state police in a high-intensity drug-trafficking area to bring down cartels.

She concluded by announcing, “Abigail Spanberger (BEGIN ITAL)is my name(END ITAL)!” She was not going to allow her male opponent to get away with making her into someone she clearly was not.

Moscatello’s chapter devoted to the question of candidate training sent chills of remembrance and recognition. Once again, I read how women need to watch the timbre of our voices, our hair, the type of clothes we wear.

I couldn’t help but recall the articles that criticized me, during my campaign for governor of Maryland in 2002, for not wearing lipstick and rouge (in fact I had, but they had faded).

I remember being accused of not wearing heels when it was announced that as Maryland’s lieutenant governor I was put in charge of the State Police, parole and probation, corrections, and juvenile justice.

It was also good to see that we are overcoming voters’ ambivalence concerning women with children. When I ran for Congress in 1986, I was criticized for not staying at home to raise my children – and my defense that my father, Robert F. Kennedy, had 10 children when he ran for president fell on deaf ears.

Now I cheer that Sen. Tammy Duckworth (D-Ill.) can give birth while in office. It seems much less likely today that women will be told that they can’t run – and govern – and raise children at the same time. Nonetheless, during her campaign Spanberger did not feel at ease acknowledging how young her children were.

Earlier female candidates had to practice their voice, and the same advice will be given to future candidates, but progress has been made, even as the work continues.

The 2018 candidates were much more at ease telling their personal stories than were the female candidates of two decades past. We all stand on the shoulders of giants and are lucky to have had many role models and support systems: Hillary Clinton, Shirley Chisholm, Tammy Duckworth.

There were many women who had fought to be in the race, many fewer who had been elected, and these new candidates had options to see what appealed to their values and to choose their path. The limitations that women face today are much less than what the generation before them faced.

Moscatello stresses that the 2018 elections were not for well-off white women but for women of color, for LGBTQ women, for women who had grown up in very tough circumstances. They were not leaning in for themselves but were intent on creating a more just country for everyone. This was not about who was getting elected but why they won. They focused on health care, jobs, the economy, immigration and gun control.

Even in the running, these women changed the rules. To run usually means quitting a job – a double-whammy for a mother. The Federal Election Commission had not allowed campaign funds to pay for child care until congressional candidate Liuba Grechen Shirley petitioned the FEC to change the rules. After receiving letters from Clinton and 20 Democratic members of Congress, the FEC did.

It is just these kinds of rules limiting who can enter the democratic process that need refreshing. A push to change the rules to include everyone in the American experiment can come only from those who have been systematically excluded. It is their voices and their experiences that are needed to make change. The FEC rule is a start.

What do women make of their victories? Lamar’s experience holds lessons. Soon after her election, she posted on Facebook, “Tennessee is racist.” The blowback was strong against the youngest African American in the legislature. She apologized and took the post down. A few months later, she worked with others to get clemency for an underage sex worker who had been sentenced to life in prison; she was hailed as a young woman helping other young women. She learned to pick her fights and her words.

The big question overhanging “See Jane Win” and our politics is: What’s next? One could point out that not only did women win in large numbers but that the voting patterns of white women changed in the first two years under Trump.

In 2016, 43 percent of white women voted Democratic, and 55 percent voted Republican. In 2018, white women’s vote was evenly split: 49 percent for each party.

But congressional midterms are not necessarily a harbinger of future success. Republicans swept the elections in 1994, and Bill Clinton was reelected in 1996.

Again, Republicans won overwhelmingly in 2010, and Barack Obama secured a second term two years later. Throughout this book, the candidates focused on the needs of their constituents. Certainly Trump’s election had energized the candidates and voters, but it was their carefully crafted messages that made victory possible.

The president and his supporters are very active. But women on both sides of the aisle will continue to develop our power. The stories told here suggest that the rise of women in leadership in 2018 can last beyond 2020 to assert a vision of what all Americans need: jobs, retirement security, health care, education, a humane immigration policy, and a government for the people and by the people.