“Every child should be nurtured with great love.”
– Lailah Gifty Akita

Duck and Cover and Drills

As a young child in elementary school, I remember some of the drills that we had. There were of course the obligatory fire drills, school bus evacuation drills (yes we had to jump out the back emergency exit of the bus) and ‘duck and cover’. Social media and constant news running 24/7 did not exist in those days. Because of this, for the majority of us, the reason for ‘duck and cover’ was not totally understood and probably not exceedingly scary, if at all scary. We would practice in our classrooms getting under our desks, covering our heads with our hands. In the halls we would line up against the wall and duck, again covering our heads with our hands. Seems pretty silly when you look back on it. If a nuclear bomb had hit, it’s very doubtful that those actions would have saved anyone.

But today’s drills are different. And they are scarier. The combination of 24/7 news coverage and social media bring to life daily reminders of the atrocities that are taking place. Children cannot be hidden from words that can come across the television as they are watching their favorite show. Shows that have probably been vetted by their parents to make sure that they are age appropriate. As adults we are horrified by what we see, children with their hands held hide evacuating a school where some of their classmates have been gunned down. Can you imagine what these images do to our children? Classmates and those who their children looked up to, the teachers and staff. If their ‘protectors’ are among the victims, how can they be safe?

I cannot imagine what is going through a six year old’s mind when he or she hears the words that his teacher says before a drill. One kindergarten teacher taught her students a nursery rhyme, hoping that it would be less scary:

Lock down. Lock Down.
Lock the door.
Shut the lights off, Say no more.
Go behind the door and hide.
Wait until it’s safe inside.

It’s not the world that we hoped for our children, grandchildren or any child. We always thought of school as a ‘safe place’. Children are where they’re supposed to be. We’re able to go off to work or do our daily routine knowing that they are at school.

The world gets all choked up when there is a mass school shooting. The victims at Sandy Hook Elementary were unimaginable. Twenty children between the ages of six and seven and six adult staff members. Twenty-six total. That was seven years ago, 2012.  The compassion that was shown throughout the world was unbelievable.

Six year old Jesse Lewis was among the victims of Sandy Hook. Jesse was a hero. The gunman’s gun was either jammed or out of bullets for a brief moment. In those few seconds or minutes, Jesse yelled to his classmates near the door to run. That courageous action of a 6 year old is credited with saving nine of his fellow classmates.

Jesse was not only a hero, but he left something behind. Three words:

On this week’s podcast, I talk with Jesse’s mother, Scarlett Lewis. Scarlett describes finding those words written by Jesse on their kitchen chalkboard. “Norturtung Helinn Love”.They were written on that day, before he went off to school. Spelled as a  year old just learning to spell. She discovered that these three words are in the definition of the word compassion across all cultures. 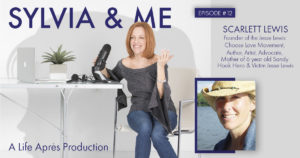 What did Scarlett do with those words? She founded the Jesse Lewis Choose Love Movement.. A journey that has turned personal tragedy into a positive impact around the world. Three words that are the formula for choosing love, a message that she is spreading along with promoting social emotional education in schools and communities. Listen to her journey and find out how having ‘fun’ is one of the most important pieces of healing and living. Yes, I did say the word ‘fun’. Another message that Jesse had left for his brother J.T.

Just a note – the wonderful graphic that starts this article was done by the talented Taylor Bogaty.

Find us on your favorite podcast platform and on any of the platforms below. And of course, our website. Listen, subscribe for free and take us with you wherever you go. Reviews, ratings and shares are always welcome.

Oh, and if you know of an extraordinary woman, please send her my way.