Mysteries surrounding families and putting the pieces together.

Mysteries. Ariana Neumann is the author of When Time Stopped, A Memoir of My Father’s War and What Remains, a New York Times Bestseller. Ariana’s father had never spoken about his past, but he did leave her the pieces to a puzzle. As a child she had always dreamed of being a detective. As an adult, she put her childhood dream to use, put the puzzle pieces together and uncovered a family that had been veiled in silence.

Mysteries. I have always loved mysteries. It started out with my first Nancy Drew book, The Secret of the Old Clock, when I was 10 and recovering from having my tonsils removed. From there my love of mysteries grew, reading them faster than they could be published. Always hardcover as I wanted to feel the book and turn the pages. Some of my favorites were series, from Nancy Drew to Harry Bosch to Kay Scarpetta. There were times when I wanted to glance at the last few pages, I was so anxious to find out who the culprit was.

Mysteries and finding your roots. It can be a piece you didn’t know was missing.

Mysteries. In recent years there has been a spike in DNA kits that could trace a person’s roots. And maybe find family members you didn’t know existed. Ellen Degeneres found out that she’s royalty, Queen Elizabeth II is her 19th cousin removed, Steven Tyler discovered that he may have gotten some of his musical talent from several generations before him, his results show that he is related to Robert Elliot, a drummer boy during the War of 1812.

Mysteries. Have you ever wondered if you have relatives living far away? Or maybe even in the next town over? In these very uncertain times, we are all finding new ways of connecting and maybe even reaching out to family that we haven’t seen in a while. My family is quite spread out, I have a sister in Massachusetts and one in Ohio, and our brother is in California. Our parents’ house in Florida used to be the central place for us to gather. Since they are gone, we’ve made a point of all getting together at least once a year, if not twice. Unfortunately, as with so many families, we will not be getting together, at least not in person.

Mysteries. In the midst of all of the unknowns, stress and fear that surrounds us, so many are finding new ways of not only connecting, but finding that they are connecting more than they ever did before. And that is exactly what is happening with myself and my siblings. Of course we would talk on the phone, one  to one. Now we find that we are staying connected together. So, with everything going on around us, we have found something really wonderful. 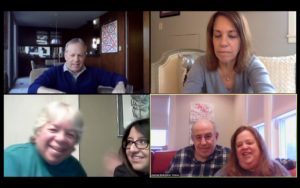 Mysteries. And that brings me to an extraordinary woman, Ariana Neumann who I had the privilege of getting to know. It turns out we share a love of mystery and discovery.The New York Times reviewer said  of When Time Stopped, “The story Neumann uncovers is worthy of fiction with hairpin plot twists, daredevil acts of love and unexpected moments of humor in dark times.”

Mysteries. Putting the puzzle pieces together.

Mysteries. Ariana grew up in Caracas, Venezuela the only child of a wealthy Czech-born industrialist. A happy child, her parents doted on her. Ariana was also a very curious child who had started a Mystery Club with her friends. She loved playing detective. One day she came upon a box in her father’s study. The box contained an identity card that had her father’s picture, but with someone else’s name. What the box contained, led her on a journey many years later, a journey that unraveled the mystery of the contents of the box and a past that her father had never spoken about.

Mysteries. Ariana tells a family memoir, a story of love and the unbelievable heroism that members of her family had shown. Her father had hidden in plain sight during the Holocaust to escape the Nazis. Among her discoveries are family members that she had not known anything about and some she had not even known existed. As Ariana writes: “I realize that without having meant to search for them in particular, I finally have found my family.” Ariana had put the pieces of the puzzle together. 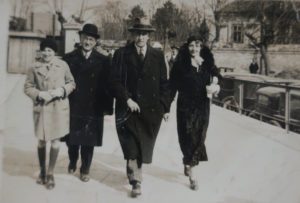 I spoke to Ariana from her home in London. Listen here to her amazing story on this week’s podcast.

We talk about family, love and putting the pieces of the puzzle together. 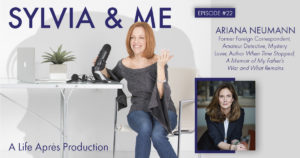 Ariana has a BA in History and French Literature from Tufts University, an MA in Spanish and Latin American Literature from New York University and a PgDIP in Psychology of Religion from University of London. She was involved in publishing, worked as a foreign correspondent for Venezuela’s The Daily Journal and her writing also appeared in The European.

She currently lives in London with her husband, three children, a basset fauve de Bretagne, a border terrier and a rescue mutt.

Mysteries. Listen here to a conversation of love and survival.

So take away some of the stress, even if for a little while and listen to my conversation with a self-made detective, Ariana Neumann. Find us on your favorite podcast platform and any of the platforms below. And of course, our website.

Be safe, be mindful of those around you and remember, you can stay connected even while social distancing. Use things like Face Time, Zoom, or Skype, There are so many ways that we can do this. Keep your mind and body moving. Practice social distancing. Listen to music. Binge on your favorite movies. Take walks. Sing while washing your hands. Feel the sun when it’s shining. Keep that smile, it will come in handy. 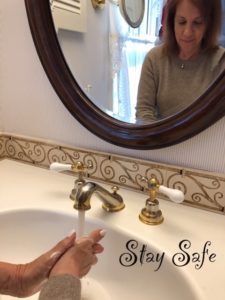