Taking Control of Your Life

“I’m not afraid of storms, for I’m learning to sail my ship.”
-Louisa May Alcott

“The most difficult thing is the decision to act, the rest is merely tenacity.”
-Amelia Earhart

You never know when life is going to give you a jolt. It’s what you do with that jolt that can make all the difference. All the difference for you and probably the people around you. We are now in very foreign territory, The pandemic has thrown what we know out the window and forced us to face the unknown. It has also made us aware of so much that is important. Of major importance – never take anything for granted.

I was going to write about women and working. Single women, married women, young women, older women, etc…. Decisions that we make. Life as we think it should be. Barriers have been breaking down with more and more women working, especially among married women. Barriers as to how married women are perceived in the workforce. And then I came across an article on the great depression and employment of married women.

Frances Perkins was in her early fifties when she became the first woman to hold the position of Labor Secretary. She had seven key policy issues that she was committed to:
a 40 hour work week,

During her tenure, she accomplished all but the last one.

Women and the Great Depression

The Great Depression of the 1930’s saw a threat to millions of workers. Married women with jobs were considered among the threat. Frances Perkins was among the many who were suspicious of working married women. She wanted unmarried women to be able to get jobs and make a living wage. At that time, most married women who worked were considered to be ‘pin-money workers.’ One definition of pin-money is the money allowed by a man to his wife to spend for her own personal comforts. The term was in reference to the small amounts of money women spent on ‘fancy’ items. Unfortunately it became shorthand for all women’s work by the 20th century.

In today’s society it seems hard to imagine but by 1940, 26 states restricted a married woman’s rights to employment. ‘Work bans’ in some form or another. Then came World War II and the idea of women working started to become socially acceptable.

‘We’ve come a long way baby.’ Well, sort of. We still have a long way to go, and we intend to keep going.

Caroline Labouchere was living a fabulous life until she wasn’t. Always counting on her husband to provide, a rude awakening came the day that he was no longer employed. Caroline’s husband worked for the British Army which had always provided them with a secure lifestyle. He had taken a post in Dubai. All was great until the post no longer existed.

Caroline had made the choice years before to be a wife and mother and leave the providing to her husband. But now, through no fault of his own, he wasn’t providing. How did Caroline go from anger and fright to  taking control of her life? 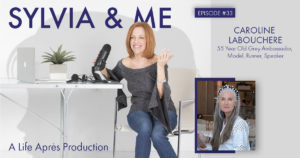 On this week’s podcast I talk with Caroline about taking control of your life. It’s possible at any age. Caroline had never been a model, but at 54 she became the grey model who has been on the cover of British Vogue 8 times.

Last week I mentioned a new routine..Actually, it was a thought of a new routine. And a week later and it appears that I may actually stick to it, at least for the time being. The routine – walking 3.5 miles each morning and trying not to get lost. I’m even venturing out a little more, social distancing and with a mask of course.

As we are enjoying the start to the summer in new ways that we could not have imagined, remember – you can always keep listening to some extraordinary, inspiring women. By the way, if you know of an extraordinary woman, contact me at sylvia@lifeapres.com.

You can find us on your favorite podcast platform. And of course, on our website,

BTW – The article that I mentioned regarding the depression and married women can be found here.