Technology and the Power of Unplugging

“Technology can be our best friend, and technology can also be the biggest party pooper of our lives.”
-Stephen Spielberg

“Well, if I called the wrong number, why did you answer the phone?“
-James Thurber

My grandmother had a party-line. Yes a party-line. For those who have never experienced using one, well basically you share a phone line with someone else. And for those who had nothing else to do, you could be assured that they would be listening in on your conversation. As kids we would pick up the phone in amazement and listen. That is until we got caught. Connection!

For my 16th birthday, my parents surprised me a with pink princess phone and my very own local telephone line. Now I could connect with my friends anytime I wanted to, away from any prying eyes or ears. Connection!

A Phone in your shoe?

To put it mildly, we’ve come a long way. There have been beepers and pagers and all sorts of gadgets in between. Maxwell Smart, the agent in the 1960’s show Get Smart, had a phone in his shoe. Unimaginable and yet, here we are. Now we can answer that call from our pocket, no longer fearing that we may miss it. 24/7/365 Connection!

It has been a life saver for so many during this time of shelter-in-home. The internet has enabled us to reach out to people who have no one else, to stay connected to love ones who we can’t visit and to find friends who we haven’t connected with in a long time. It has allowed us to virtually go on tours, visit museums, and attend concerts all from the comfort of our homes. And it has enabled many to continue working and allowed students to continue their education from home while offices and schools have been forced to close.

But are we losing out by being so close to technology 24/7/365? Do we need to give our minds, our fingers, our ears a break? What if we walked away from it for a day or even an hour? Maybe give ourselves a break from constantly being connected to the outside world. What would happen? 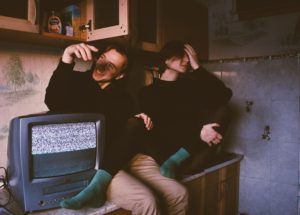 Tiffany Shlain, author of 24/6: The Power of Unplugging One Day a Week unplugs with her family one day a week, a ritual she started over 10 years ago. And a ritual that has continued during this pandemic. Her 17-year-old daughter recently told her that “Our screen-free day is the only day I don’t feel like we’re in quarantine.” 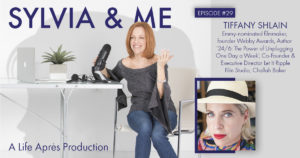 On this week’s podcast I talk with Tiffany. Emmy-nominated filmmaker, Founder of the Webby Awards and Co-Founder & Executive Director of Let It Ripple Film Stuido. Let It Ripple is a nonprofit film studio making films and orchestrating global days of film and discussions around important issues shaping our lives.

Tiffany has received over 80 awards and distinctions including selection for the Albert Einstein Foundation’s initiative Genius: 100 Visions for the Future, is on NPR’s list of Best Commencement Speeches, and was named by Newsweek as “one of the women shaping the 21st century.” The Museum of Modern Art in New York premiered her live cinematic essay performance, Dear Human, on Feb 15th, 2020. She is also co-founder of 50/50 Day, Character Day and the International Academy of Digital Arts & Sciences.

Four of her films have premiered at Sundance, including her acclaimed feature documentary Connected: An Autobiography about Love, Death & Technology. The New York Times hailed it as “high-tech Terry Gilliam,” and “examining everything from the Big Bang to Twitter.” The US State Department has selected four of her films including Connected to represent the US at embassies around the world for their American Film Showcase. And Tiffany serves as a film expert for selected envoys.
​
Tiffany’s film 50/50: Rethinking the Past, Present, and Future of Women + Power, premiered live at TEDWomen, at 275 TEDx’s globally, and on Refinery29. And it was the centerpiece film for the first annual 50/50 Day which had over 11,000 screenings around the globe all linked together in an online discussion about what it’s going to take to get to a more gender balanced world. Her films and art installations have shown at museums including MoMA NYC and the Leonardo da Vinci Museum.

Tiffany lives in Northern California with her husband and collaborator Ken Goldberg (an artist & professor of robotics at UC Berkeley) and their two daughters Odessa & Blooma.

Things are starting to open

As things around us start to open and flowers bloom, be smart, be safe and be mindful of those around you.. Keep your mind and body moving. Practice social distancing. Listen to music. Binge on your favorite movies. Take walks. Sing while washing your hands. Feel the sun when it’s shining. Keep that smile, it will come in handy. And listen to some extraordinary, inspiring women. If you know of an extraordinary woman, contact me at sylvia@lifeapres.com.

You can find us on your favorite podcast platform. And of course, on our website.